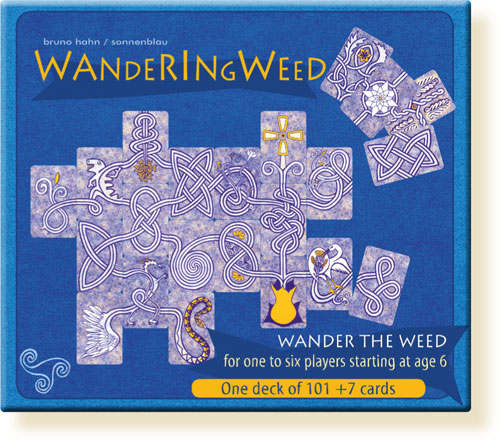 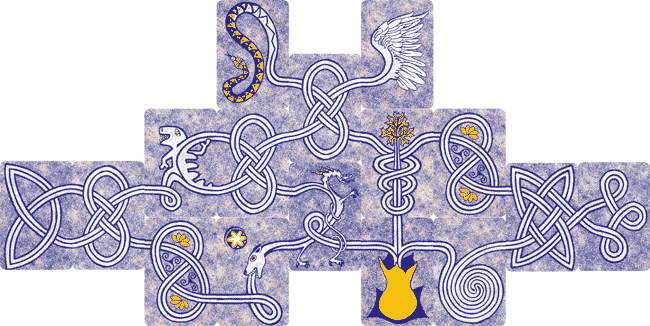 Many people are fascinated when they see the WanderingWeed cards. Some people associate it with Memory, because of the similarity of the motifs, or with Dominoes because the cards are arranged in rows. Some think of a puzzle as a complex picture builds up or of Tarot cards when they see the impressive symbols. But WanderingWeed is a new, unique and amazing game with many possibilities.

The deck consists of 108 cards. The motifs of the 101 picture cards originate from historical patterns. They are combined with narrative images, illustrated in a discrete but appealing way. The idea of the game is to conjure up a past culture, to stimulate a feeling for flowing patterns, rhythm and form and maybe even to encourage your personal urge to draw.

Just as water revitalizes itself by flowing freely, your spirit will gain vital forces while your eyes follow the lines. This was one of the purposes of the plaitwork reliefs in churches.

Plaitwork borders also symbolize infinity – following the lines we return to the beginning. 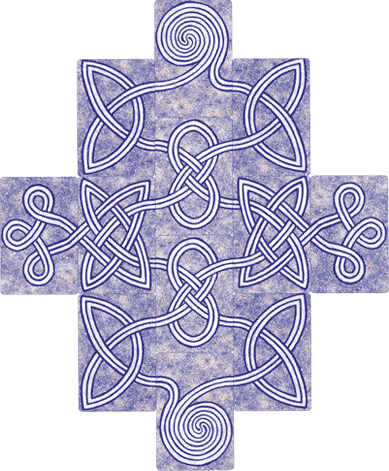 WanderingWeed stems from a spirit of completeness and leaves you wide berth for imagination while playing. It is not an oracle placing your own fortune in the centre of awareness. The game with the constantly transforming bindweed or convolvulus has a regenerating and healing effect on a higher level, but it is lively and fun at the same time. WanderingWeed can be played from school age onwards and is a source of spiritual vitality at any age. WanderingWeed creates an atmosphere of creative tranquillity and helps you encounter yourself.

Plaitwork or knotwork is often seen as a decorative means of decorating plain surfaces, but its origin has a ritual character. Since the 10th century we have seen lines which were revealed to the initiated hierophant through meditation in the Celtic and Lombard chisellings, for example They express the interweaving of the spiritual and the earthly world and the line (rite) also symbolizes the vibrating sound which is the origin of all being (John, 1).

The conception of these lines ranges from strictly geometrical structures to freely swinging forms of higher regularity, which, once intensified, can acquire the character of a mantra. 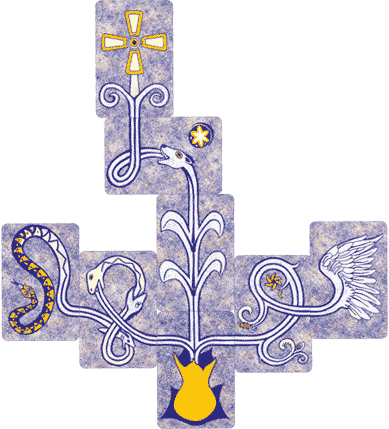 WanderingWeed is a card game from the world of knotwork ornaments. To create it, the borders were cut apart at the points of intersection, allowing for manifold combinations, amazing transformations and beautiful images. The weed grows from card to card, flows into ever-changing new figures, transforming its wondrous shape.

But take care that every tendril is carried on and that the weed shapes a complete picture. 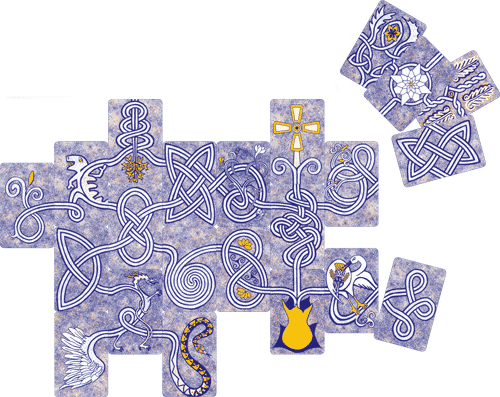 You can wander the weed alone or with a group of players. Those who play alone don’t need any rules and will find their own way of doing things. Two variations are described in the game instructions for up to six players. We just want you to know this much: Wandering the growing weed brings about an unusually peaceful atmosphere while playing since it is a game that doesn’t need winners.